Somehow I had never heard of the band Avoid One Thing until last week. I was aimlessly scrolling through the social media wasteland when incredible artist Nan Coffey posted that her friend Joe Gittleman had a new album coming out. I pay attention when people who clearly have superior taste (seriously, browse her site) recommend something. In this case doubly so since Joe Gittleman is the legendary bassist for The Mighty Mighty Bosstones, who are the band of my life.

Not long after seeing Coffey’s post, the Bosstones themselves put up a post about the album’s release. They posted a snippet of the eponymous lead track ‘Right Here Where You Left Me’. If I hadn’t ordered it from Newbury Comics, I certainly would have done so after hearing that.

Avoid One Thing is, as mentioned above, fronted by Gittleman ‘The Bass Fiddleman’, but the connections to bands I love doesn’t end there. Guitarist Amy Griffin played with Boston punk heroes Darkbuster for years, and drummer John Lynch played with another fabled Boston band, the Neighborhoods.

As I write this I’m actually feeling guilty for not being aware of the band or their previous releases. My only defense is their years of being active came during a lot of the Bosstones wilderness years when I wasn’t very connected to the Boston scene, or any scene really. I’m not sure how I never came across them since, but alas, I did not.

Avoid One Thing released two previous albums, “Avoid One Thing” in 2002 and “Chopstick Bridge” in 2004. Since then they’ve been on what I guess you could call hiatus playing in their various other bands. During that period Gittleman has been working on the songs that eventually became their new album “Right Here Where You Left Me”.

The album was recorded over the span of five days and features a host of familiar names. David Minehan, frontman for the Neighborhoods, Tim Brennan of the Dropkick Murphys, original guitarist Paul Delano, Ted Hutt (Who has worked with everyone), and posthumous lyrics from Greg Carr all appear on the album. Reading the credits reads like a Boston punk all-star team. It was produced over the course of a year by Paul Q. Kolderie who produced most of my all-time favorite albums it seems like.

That’s not even a joke about Kolderie, he produced or engineered so many albums I love my record collection should be named after him. Obviously, I love every Bosstones he worked on, but he also worked with Belly, Big D and the Kids Table, created a whole new genre with Uncle Tupelo, and produced the Warren Zevon album “Life’ll kill ya” which I just wrote about in my post about truth in music.

With all that weight behind it, the only question left is, “Is it any good?”. The answer is, of course, hell yes. It’s fucking fantastic from start to finish.

The record starts with a burst of punk-rock-meets-the-Replacements glory in the title track ‘Right Here Where You Left Me’. I love it when albums don’t screw around and open with mission-statement type songs and that’s what this song is. The opening lyric says everything you need to know right off the bat, “This is for the malcontents, and the years misspent”. It’s a song about being lost, or alone, or the world simply not caring about you. I don’t know how autobiographical it is, but it’s a perfect way to open an album.

The second song is about a drunken day flying kites, “Crashing Kites”. At least, that’s what it’s mostly about. It describes the day in detail, including probably my favorite lyric on the album, “The Strummer CD’s still in on repeat”. Joe Strummer being my personal hero and the odds that the cd in reference is one of his Mescaleros albums makes me just happy as hell. I’ve had more than a few days where I’ve listened to Strummer on repeat. As the song goes on it shifts from being happy memories to the more melancholic idea of losing touch and growing apart. Of all the tracks on the album, it’s the one that’s most reminiscent of Gittleman’s Bosstones work. If it had appeared on “Let’s Face It” or “Pin Points and Gin Joints” it would have worked just as well. Fewer horns, but still a killer song, and pretty resonant.

When “Disassembly Line” starts it keeps reminding me of the Street Dogs. I don’t know if it’s the guitar sound or what. The rest of the song quickly settles into the signature sound of the album, which is something like “If the Replacements were from Boston rather than Minneapolis and Mike Ness was a member”. Avoid One Thing’s influences all float through this ode to change and life falling apart. It’s a terrific song. I particularly like the way the last verse builds to the final line of “But if you need me I’ll be back come Monday” and then jumps into the final chorus. It’s dramatic and really gives the song a cool arc.

“All The Same To Me” is about drunken regrets, lost nights, and being loud drunks. It’s a guitar-heavy tune, probably the only one on the album where the vocals disappear into the background a little in the production. It’s a good song with a fun bouncy rhythm.

“Enemy” could easily double as a Social Distortion song. It’s got a similar vibe and Gittleman’s growly vocals even sound a little like Mike Ness. It’s a phenomenal song, one of the strongest on the album. The heart and soul that Avoid One Thing put into every song is bursting at the seams. There is power and energy in every word and note. The driving guitars and drums tear set a powerful pace and the shouted backup vocals from Griffin make me think this would be the highlight of any live set. The lyrics continue the theme of looking back with regret at booze and lost nights. 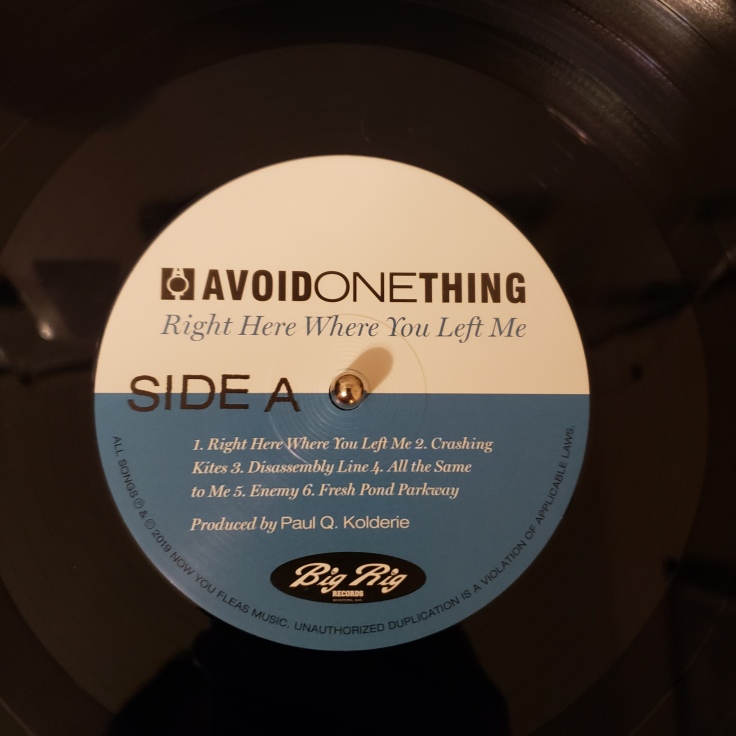 The last song on side A of the record is “Fresh Pond Parkway”. This is what passes for a quiet slow song on the album. It’s not really quiet or slow, but following the roaring “Enemy” it works like a ballad. I’m not sure who the person the author lost is, but whoever they are, I hope they know they’re missed. It’s lonesome and poetic, but without losing the sound that runs through the whole album. I particularly loved the echoey distant vocals on the outro.

Side two jumps right back into the fray with “Solitary Man”. There aren’t a lot of soaring punk rock songs that deal with anxiety and fear, so “Solitary Man” doesn’t have a lot of company. The lyrics are as powerful as the guitars. The vocal is passionate and emotional. It’s another song that would fit on a Bosstones album pretty seamlessly. Hearing these songs and lyrics makes me rethink some of the Bosstones tunes he wrote. I’m guessing if Gittleman ever read this he’d roll his eyes at the references to his other band, but as steeped in Bosstones music as I am it’s hard to not hear it other places. Regardless, this is a great song.

“A Million Maids & Janitors” follows the theme of sleepless nights set in “Solitary Man”. Gittleman is singing about dark nights of the soul alone in hotel rooms. The whole album is relatable, but this song is perhaps the most relatable out of all of them. Hotel rooms are in-between places and it’s impossible to ever feel completely comfortable in them. Jesse Malin released a similar song in spirit on his incomparable “Sunset Kids” album, called “Room 13”. It makes me wonder if all rock stars have similar laments.

The acoustic guitar comes out on “Shutting Down the Radar”. It’s the kind of sad almost-Irish-folk song that crops up on just about every album from the punk scene in Boston. I don’t know if Gittleman is at all Irish, but he’s at least Irish by osmosis here. The good thing is that the reason these kinds of songs appear on all these albums is because they’re great. It’s a barroom sing-a-long that guys in mohawks are going to be singing with tears in their eyes in a couple of weeks when the taps close and no one is ready to go home. It has all the sadness of the album, but is infused with a bit of hope, “And if I still believe come Monday morning, that would be good enough.” Amen.

“Better Left Alone” has it all. It’s got the regretful-but-hopeful lyrics, the cool guitar, great drums, and the anthemic punk rock shout-along vibe. If I was to release a single from the album, it’d be this. It feels like it could tell the whole story of the album in one song. I don’t know if it’s the best song on the album, only time will tell what that ends up being for me, but it’s got a good chance at it. I’m listening to it late at night and relatively quietly on my laptop and it just sounds wrong. It’s the kind of song that needs to come blaring out of speakers in a sweaty venue somewhere in Boston while people shout along to it.

The album closer is “Where We End Our Days.” The acoustic guitar is back and so are all the influences and years that led up to this album. You can hear the Bosstones, Social Distortion, The Replacements, and most of all the long hard years that Gittleman has lived through on his journey in it. It’s a wonderful finish. A Bit mournful, a bit regretful, a bit hopeful, it’s an emotional ride and a perfect coda to an incredible album. The words written on the tattoo mentioned in the song seem to perfectly capture things:

We are the ones, born to chase the sea and the sun
As long as we have a laugh along the way
It doesn’t matter where we end our days

“Right Here Where You Left Me” is an autobiography of sorts by a guy who has seen it all and done it all. The journey hasn’t always been perfect but along the way, he’s had some wins and some losses. This album is about living through all that and the scars left. It’s not perfect, no album is really, but it comes pretty close. I might be predisposed to his music since, as I mentioned, his other band has been the soundtrack for my life, but I wouldn’t hesitate to recommend this to anyone. Gittleman, Griffin, and Lynch have managed something extraordinary here, and all I can say is that I hope I get a chance to see them play some of it live because the truth always sounds better in person.

4 thoughts on “If I Still Believe Come Monday Morning”